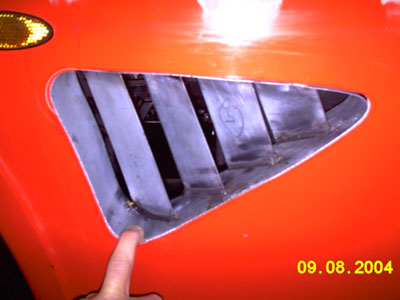 If you read the earlier part regarding side vents to help cool the engine by increasing the airflow through the engine bay, you’ll see the type of thing I used here. I bought some alloy ones from a well known AUSTIN HEALEY parts supplier. They were expensive at around £125 but I thought they looked the part and would do the job I wanted. When they arrived I took one look and said, “They’re going straight back!” They were absolutely dreadful! It looked as if they’d been pulled out of the scrap bin and posted to me. I phoned them the next day and told them what I was doing but they didn’t seem to understand what I was talking about. It went something like this:

Me: “They’re coming back. They’re full of scratches, twisted and aren’t the same size.”

Them: “Why, what’s wrong? You can paint them. They’ll twist into place when you fit them. And anyway, people want them like that so they look original.”

And when I got my next credit card statement, they’d taken money off ME for a handling charge!!!

Anyway, I phoned and told them what I thought of them in no uncertain terms and got my money back from the card people.

The upshot was that I made a template from photos I’d got and made myself a ‘former’ to bend some 3 inch strips of mild steel round and made my own. Total cost £5. Yes. You read it right. A FIVER! And that was for the steel cut how I wanted it.